Starting in a far-off European land, a long time ago : Galatia (well before it became part of Turkey.

The best known Galatian word is δρυνεμετον, which Strabo described as a place where the tribal elders assembled. The element dru ‘tree’ (especially oak tree) is routinely claimed as Celtic, but in fact the World Tree was a universal theme of early religions around the world. One well-known example was the Yggdrasil of Norse mythology and sacred oaks were particularly important to Germanic peoples, as several instances of Thor’s Oak imply. The Bible has many cryptic mentions of terebinths or oaks (notably Genesis 18). The words true, tree, druid, dryad, and tar seem to be linguistically related.
http://www.proto-english.org/gal2.html

How does a town in what is now Turkey have a Celtic name that we can recognise?

Ancient Galatia (/ɡəˈleɪʃə/; Greek: Γαλατία, Turkish: Galatlar) was an area in the highlands of central Anatolia (Ankara, Çorum, Yozgat Province) in modern Turkey. Galatia was named for the immigrant Gauls from Thrace (cf. Tylis), who migrated eastwards and settled to became its ruling caste in the 3rd century BC, following the Gallic invasion of the Balkans in 279 BC.
Ref : https://en.wikipedia.org/wiki/Galatia

Contrary to some urban myths that all Celts came from the Middle East and headed west, Galatia was founded by a mass migration of thousands of Gauls (from what is now Southern France) who headed east. They took their language with them, and some towns were founded and named by them.

The Galatians originated as a part of the great Celtic migration, which invaded Macedon and central Greece, as far as Delpi. The original Celts who settled in Galatia came through Thrace under the leadership of Leotarios and Leonnorios c. 278/277 BC. These Celts consisted of three tribes, the Tectosages, the Trocmii, and the Tolistobogii.
Ref : Celtic Invasions of Greece


Strabo describes the constitution of the Galatian state: by custom, each tribe was divided into cantons, each governed by a chief ("tetrarch") followed by a judge, whose powers were unlimited except in cases of murder, which were tried before a council of 300 drawn from the 12 cantons and meeting at a holy place, 20 miles southwest of Ancyra, written in Greek as Δρυνεμετον (Drunemeton or Drynemeton, Gaulish *dru-nemeton "holy place of oak"). It is likely it was a sacred oak grove, since the name means "sanctuary of the oaks" (from drus, meaning "oak" and nemeton, meaning "sacred ground").

In Ireland, the origins of the Irish are many and various to put it politely. Others might call it a complete shambles of conflicting Creation Myths. In Irish legend, the Fir Bolg were in Ireland before the Tuatha Dé Danann arrived. The Fir Bolg in turn were

“descended from the Muintir Nemid, an earlier race who abandoned Ireland and settled in different parts of Europe. Those who settle in Greece become the Fir Bolg and eventually return to the now-uninhabited Ireland. After ruling it for some time, they are overthrown by the invading Tuatha Dé Danann; another group descended from the Muintir Nemid.”

Who were the Muintir Nemid? The word nemed means "privileged" or "holy" in Old Irish. Coincidently, a nemeton was a sacred space of ancient Celtic religion. There are not a great many Nemeton (or Nymet or Nympton) place names in Britain, but the largest concentration of them is in Devon. So perhaps the Muintir Nemid came from Devon, not Greece?

Of all the counties in Britain, the one that still contains the most places with "Drew" or "Nemeton"-related names is Devon, followed by some in Somerset. 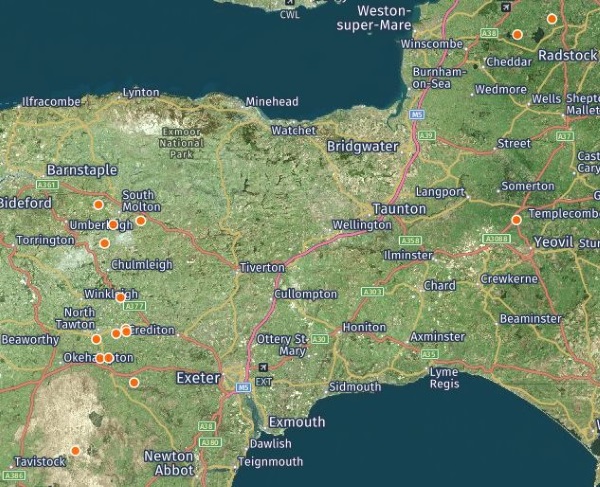 Then there are the Nemetons. North Tawton in Devon is the most well-known, thanks to it being named by the Romans as Nemetostatio - "The Outpost of the Sacred Groves". Several modern placenames still contain Nymet or Nympton.

There are a few in the hills of North Somerset:
The delightfully-named Nempnett Thrubwell and Stanton Drew


Similarly, in the hills of Gloucestershire:
Littleton Drew and Nympsfield


Lastly, Nymetboghe, or Nymetbow, the site of the first henge (re)discovered in Devon, in 1984 by Frances Griffiths. A circular space about 184 in diameter with post holes, probably for a wooden henge like Woodhenge in Wiltshire. The Nymetboghe henge site, and several of these villages, are on a spur of red sandstone, slightly raised from the surrounding countryside, that runs from near Exeter towards Okehampton. As such, it would form a natural long-distance path on drier ground across the middle of Devon, north of Dartmoor.

Scattered about the country are isolated Celtic names which show that the Romano-British population of Devon were not entirely upland dwellers. There are two Crookes, one in North Tawton, the other in Combe Raleigh, both in low-lying country. The hamlet of Aunk, in Clyst Hydon parish, certainly has a Celtic name: it lies on a low spur of the valley of the Clyst about two miles north of Whimple, which is also a Celtic name (“White pool”). There can be little doubt that most of these Celtic names designate hamlets and farmsteads which have been continuously occupied from Celtic times into the period of Saxon settlement, when they were left undisturbed, and so down to the present day. When we stand in such places as this we are in the presence of a remote antiquity, going back to the days of the Celtic kingdom of Dumnonia.

Along with descriptions of the people:

There is, above all, the evidence of the predominant physical types one finds among the native Devonian population to-day, a high proportion of whom clearly reveal a pre-Saxon ancestry. ‘On the coasts of Devon there may be several patches with dark and broad-headed stalwart men’ who are found also in nearly all the Cornish fishing harbours. ... “Other pre-Saxon types abound on the fringes of Dartmoor, short, dark long-heads. A very common type all over Devon, especially perhaps in the east of the county, is the short dark round-head, with dark brown hair, a quick hazel eye, small hands and small feet. The Saxon type, taller with fair hair and grey eyes, is also conspicuous in Devon as we might expect in the light of what has been said already, but the older stocks form a high proportion of the native population and suggest that many pre-Saxon groups survived the English settlement and went on undisturbed in their hamlets and farmsteads” (pp. 47- 48).
W.G. Hoskins, “A New Survey of England: Devon”. (Newton Abbot: David & Charles, 1972).


Nemphlar, a village in Lanark parish, Lanarkshire, on the high grounds (605 feet) above the right bank of the Clyde, 2 miles WNW of Lanark town. It lies among beautiful braes, straggling along them for a considerable distance; covers the site of an ancient chapel of the Knights Templars; and has a public school.—Ord. Sur., sh. 23, 1865.
http://www.visionofbritain.org.uk/place/22236


Next : Speaking in riddles