In the limited education we get on the history of religion, most of us acquire a kind of binary (or black and white) view of how Christianity separated from Judaism. It's a very simplistic notion along the lines of Christians aren't Jews, and visa versa. In Britain, many of us have only a hazy idea of how Christianity got established. For example:

Augustine, the first Archbishop of Canterbury, arrived on the coast of Kent as a missionary to England in 597 AD. He came from Rome, sent by Pope Gregory the Great. It is said that Gregory had been struck by the beauty of Angle slaves he saw for sale in the city market and despatched Augustine and some monks to convert them to Christianity. Augustine was given a church at Canterbury (St Martin’s, after St Martin of Tours, still standing today) by the local King, Ethelbert whose Queen, Bertha, a French Princess, was already a Christian. This building had been a place of worship during the Roman occupation of Britain and is the oldest church in England still in use.
http://www.canterbury-cathedral.org/conservation/history/

Interesting that the “building had been a place of worship during the Roman occupation of Britain”, although it would be good to know what kind of worship they mean. Perhaps Mithraic?

But Augustine wasn't the first Christian Bishop in Britain, he was the first Roman Catholic Christian Bishop. There were well-known Christians that pre-date him. For example, Pelagius, born c.354AD, was a British-born ascetic moralist, who became well known throughout ancient Rome.

Where did these other Christians come from?

To answer that question, we have first to understand and recognise that there were several competing groups, all with Judeao-Christian roots. These all produced theologies that differed from the Roman model that blinkers our perception of what a Christian is.

Babylonian Elchasaites rejected Pauline Christianity, and were one of the first Gnostic Christian movements, with connections to Cathars and Bogomils.

The term "Manichean" is widely applied (often used as a derogatory term) as an adjective to a philosophy of moral dualism, according to which a moral course of action involves a clear (or simplistic) choice between good and evil, or as a noun to people who hold such a view.See Pelanius.

During the third century, Mani founded a Dualist-Gnostic religion that drew on Christianity as well as Zoroastrianism and Buddhism, and his Manichaean faith endured through the end of the Middle Ages. ... Mani’s mother was Parthian, but his father, Patik, belonged to a very significant group called the Elchasaites. This name takes us back to very early forms of Jewish-Christian belief. ... This baptist sect was related to the Jewish-Christian Ebionites, and also, possibly, to the Jewish Essenes. ... The fourth century writer Epiphanius of Salamis discusses Elchasai in the context of a group of Jewish and Jewish-Christian sects, including Nazareans, Ossaeans (?Essenes) and Sampsaeans.
Mani

This is not an extinct religious group; it still exists in small communities in "Persia", Iraq and Iran.

Manichaeism spread with extraordinary speed through both the east and west. It reached Rome through the apostle Psattiq by a.d. 280, who was also in Egypt in 244 and 251. It was flourishing in the Fayum area of Egypt in 290. Manichaean monasteries existed in Rome in 312 during the time of the Christian Pope Miltiades. ... It thrived between the third and seventh centuries, and at its height was one of the most widespread religions in the world. Manichaean churches and scriptures existed as far east as China and as far west as the Roman Empire. It was briefly the main rival to Christianity in the competition to replace classical paganism. ... How Manichaeism may have influenced Christianity continues to be debated. Manichaeism may have influenced the Bogomils, Paulicians, and Cathars. ... The Manichaeans preserved many apocryphal Christian works, such as the Acts of Thomas, that would otherwise have been lost.
Manichaean

Does it seem odd or unusual that “Manichaeism spread with extraordinary speed through both the east and west”? Ideas can spread like wildfire, given the right conditions, when people feel oppressed, or have feelings of a spiritual drought.

Something very similar seems to have happened when Bogomilism headed west.

Bogomilism (see Gnosticism) was a Christian neo-Gnostic or dualist religiopolitical sect founded in the First Bulgarian Empire by the priest Bogomil during the reign of Tsar Peter I in the 10th century. It most probably arose in what is today the region of Macedonia as a response to the social stratification that occurred with the introduction of feudalism and as a form of political movement and opposition to the Bulgarian state and the church. .. The Bogomils were dualists or Gnostics in that they believed in a world within the body and a world outside the body. They did not use the Christian cross, nor build churches, as they revered their gifted form and considered their body to be the temple.
Ref : Bogomilism 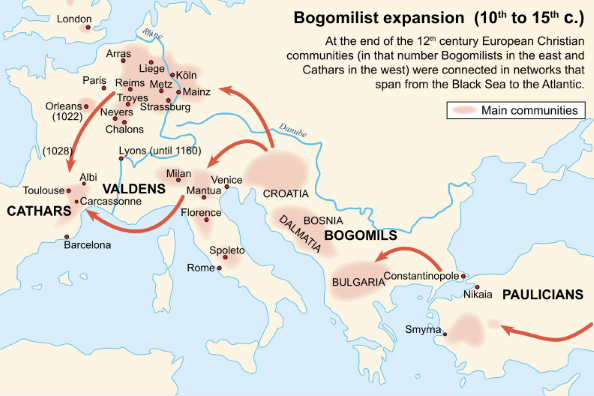 Last, but not least, Coptic Christianity

The Egyptian Church, which is more than 1,900 years old, and most likely the oldest Christian church in the world, traditionally believed to be founded by St Mark at around AD 42. ... The Catechetical School of Alexandria is the oldest catechetical school in the world. St. Jerome records that the Christian School of Alexandria was founded by Saint Mark himself ... Many scholars such as Jerome visited the school of Alexandria to exchange ideas and to communicate directly with its scholars. The scope of this school was not limited to theological subjects; science, mathematics and humanities were also taught there. The question-and-answer method of commentary began there ... Christian monasticism was born in Egypt and was instrumental in the formation of the Coptic Orthodox Church character of submission, simplicity and humility
Ref : Coptic Orthodox Church

This is significant; the Coptic Church traditions maintain that:

It is known in the ecclesiastical history of the Church of Alexandria that the Church had sent missionaries in the 3rd or 4th century to the Celtic lands, especially monastics. It is also known within the Celtic tradition, especially in Ireland, that the foundation of the monastic system among the Celts was either based in portion on or inspired by the Egyptian monastic system, and there are many traces of Alexandrine theology embedded in Celtic theology.

Next : Gnostic Christianity - an almost-lost heritage