The story begins with the oldest-known (and still extant) creative works on mainland Britain - Avebury, Silbury and Stonehenge. The sheer physical size of these megaliths sometimes obscures their greater significance, as both Avebury and Stonehenge were also places to contemplate the hidden mysteries of nature and science, for personal, scientific and spiritual development.

What would the original megalithic masons have made of a modern interpretation like Stanley Kubrick's monolith in the film "2001"?

Often just driven past by people in a rush to get to Avebury. Some might well say that, in its day, Sibury was equally spectacular. Built as a ramp, rising in a series of steps, made of pure white chalk that would have reflected sunlight for many miles. The shape was not circular as it appears now (because of the overgrowth of thousands of years of grass). Originally it was a polygon, with faceted sides. The steps were not level, but made a spiraling walkway up to a flat top. With the River Kennet water levels being much higher than now (because of water extraction), it's likely that Silbury would have been almost surrounded by a water-filled ditch.

Image © Copyright unknown. No plagarism intended, proper acknowledgement will be provided when we learn who the author is.
Silbury Hill - as it was

What do people see now when they get to Avebury? Probably not what William Stuckeley saw in c.1720: 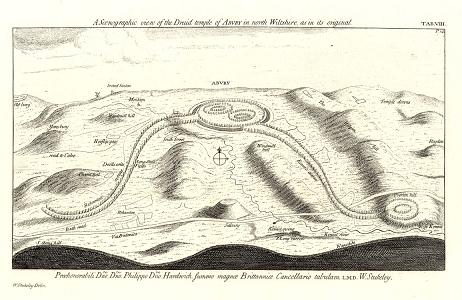 I have a vague notion, from looking at the old pictures; it's easy to imagine Avebury as a womb, and the two avenues as fallopian tubes. Could this be connected to a more spiritual view of the world? Or a view that the source of rivers was feminine, where the river was given birth by a great earth mother or goddess.

When, long, long ago, you were walking towards the setting sun on the southern bank of the great River Thames, at its junction with the Kennet (as modern maps name it) you would surely not attempt to cross it to continue along another, then nameless, branch of the two merging rivers – which we now call the Thames. You would simply fork left and follow the southern bank of what we now call the River Kennet. And when you reached the point at which this river, which you thought was still the Thames, rose from the earth, you might well build something significant to mark the river’s birth.
(Jim Leary)

Lughnasadh (or Lammas, the Druidic First Harvest) meets Brittania, the Earth Mother, and The Lady of The Lake. Swallowhead is a sacred womb and magical things are given birth at Silbury. The River Kennet is Kunnet is Kunnt and is not a rude word. A good time is had by all.

Next : The big lumps on the horizon

1: Avebury - A Physical Description 2: Footsteps of the Goddess 3: The many faces of Silbury Hill