You Can Leave Your Hat On

This particular story starts with the Berlin Gold Hat. A computational device created thousands of years before we had digital computers.

The Berlin Gold Hat is the best preserved specimen among the four known conical Golden hats known from Bronze Age Europe so far. Of the three others, two were found in southern Germany, and one in the west of France. Ref : Berlin Gold Hat

the gold leaf cones of the Schifferstadt type, to which the Berlin example belongs, represent systematic sequences in terms of number and types of ornaments per band. A detailed study of the Berlin example, which is the only fully preserved one, showed that the symbols probably represent a lunisolar calendar. The object would have permitted the determination of dates or periods in both lunar and solar calendars.

The functions discovered so far would permit the counting of temporal units of up 57 months. A simple multiplication of such values would also permit the calculation of longer periods, such as metonic cycles. Each symbol, or each ring of a symbol, represents a single day. Apart from ornament bands incorporating differing numbers of rings there are special symbols and zones in intercalary areas, which would have had to be added to or subtracted from the periods in question. Ref : Berlin Gold Hat

It's being described as a 3,000 year old calendar. But the repeated circular arrangment means that the way it worked was more like an analogue slide rule or a mechanical calculator. 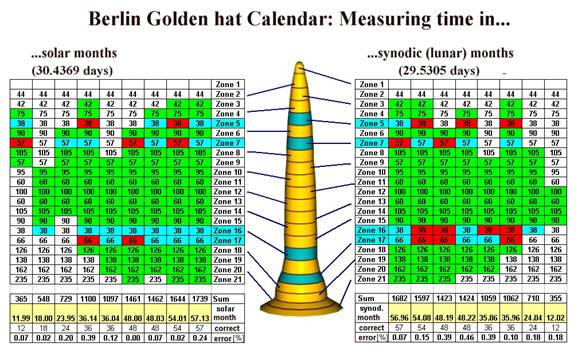 Was this confined to France and Germany? Perhaps not. In the museum in Devizes Wiltshire, near Stonehenge, there's the Golden Lozenge. This too appears to be a calendar or calculator, albeit a different kind.

The lozenge, of 0.5-mm beaten gold, was excavated in 1808 AD from the Bush Barrow, 1 km from Stonehenge. "Until now, it has been assumed that the plaque was only decorative. After examination and measurement, the patterns of its carefully inscribed markings are believed to be identifiable as a calendar fashioned for use at Stonehenge. Found over the breast of a skeleton of a tall man, its symmetrical shape and correct corner angles make it appear probable that the plaque had something to do with the four cardinal points and solstitial sunrises and sunsets. Ref : Science Frontiers

Next : Gog and Magog

1) You Can Leave Your Hat On