To stimulate your awareness, and (thereby I hope) your receptiveness for what follows.

(Cue some spooky music, sound effects and someone with a really deep voice)

Imagine, if you can, a world without electricity, without computers, without the internet, without on-demand videos and even without Twitter or Facebook..

Shocking? It’s certainly an appalling thought for my children, who get distressed as soon as they can’t find a WiFi point they can access!

You can relax, I was only kidding (apart from TwitFace). Usually such notions are trailers for “post-apocalyptic” fantasy movies, which very few people really hope for. Well, there are some, but (as they say) that’s another story. I’ve already mentioned some of things we take for granted. The internet and thousands of well-known websites. But there’s something that even they take as granted, without which they could not function at all.

Clocks are now everywhere. On our wrists, our phones, and in every computer. Most of us rule our working day with them, for the times of trains, the hours we work, when to eat, when to watch our favourite TV programmes, when to go to bed and when to get up … the list goes on and on. How many of us ever give it a thought? But not long ago, owning a watch was a rare and exotic thing, only for the wealthy or privileged few. In the 18th century, the British government offered rewards of many thousands (the equivalent of millions today) for anyone who could invent reliable clocks. Such items were treated as military weapons, because accurate navigation at sea was vital for the control of the sea by the imperial powers’ navies. The British Royal Navy in particular gave it special attention. Harrison’s Chronometers were the most famous of the results.

Image of Harrison, the tired but proud and triumphant Yorkshireman. (c) Wikimedia.

Despite the huge outpourings and inventiveness of the Industrial Revolution, the lack of clocks for many carried on even into the twentieth century. A few of us might even remember when our children didn’t have such luxuries, or being approached in the street by children bereft of watches and mobile phones : “Hey mister, can you tell me the time?”

Likewise, here in “modern” Western Europe, we’re so used to our calendar, we barely ever give it a thought, except maybe for stray moments when we’re trying to remember how many days are in the month. We certainly tend to forget that the calendar we’re using is largely a strange Roman device, imposed on us (in Western Europe) some 2,000 years ago. How many people even realise the modern world has more than one calendar still active? But there are dozens of calendar systems. The ones that some of us are still vaguely familiar with are ones like the Chinese, Muslim, Jewish, Mayan, etc. These are generally either a Solar or a Lunar system. If you are Jewish or Muslim, and count lunar months, you get a 13 month year that doesn’t quite match a Solar year. From which point all kinds of calendar-keeping mayhem can break loose. Most of our national holidays are fixed in the calendar, but most of us have only a vague notion of why they are on those dates.

Let's say I started writing this on 21st December 2014, on the day of the Winter Solstice. Which is nice, but so what?

Question: What do we mean by a Solstice? Answer (from someone with an MBO* degree) : It's the day of the year when the sun is visible for the longest or shortest time. * MBO = Master of the Bleeding Obvious

Time. There it is, the word's been said. What time? How would ancient folk, with no clocks or watches, have any idea what the time was? Or how to tell the time? Or measure the passage of time?

Question: In the absence of a clock, what would ancient folk have been observing or measuring? Answer: It was the observed motion and positions of the sun, moon, planets and stars.

All these observed positions are, of course, relative to the Earth, and especially where you are on the Earth.

According to a recent BBC article:

The solstice doesn't always occur on 21 December. Sometimes it nudges into the early hours of 22 December, which will happen again next year. The hour of day also varies. Last year's arrived at 17:11. Next year's will at 04:38.

Especially for those of us who get up in the dark to travel to work, the more astute of these early risers might have perceived a curious development, which may have passed by the more bleary-eyed unnoticed. It would seem logical that after the shortest day has elapsed the mornings would immediately start getting lighter earlier. But this isn't what happens - the mornings continue darkening until New Years Eve!

So what is behind this peculiarity, which appears to fly in the face of received wisdom about the solstice - surely the shortest day should experience the latest sunrise and earliest sunset?

It's because there are not 24 hours in a day!

It’s an approximation. There are two reasons why the length of the solar day varies, the first being the fact that the axis of the Earth's rotation is tilted –c.23.5 degrees from the vertical* - and second, the Earth's speed varies because it moves in an elliptical orbit around the sun, accelerating when it is closer to the star's gravitational pull and decelerating when it is further away.

*vertical in this context means at 90 degrees to the line between the centres of the Earth and the Sun. 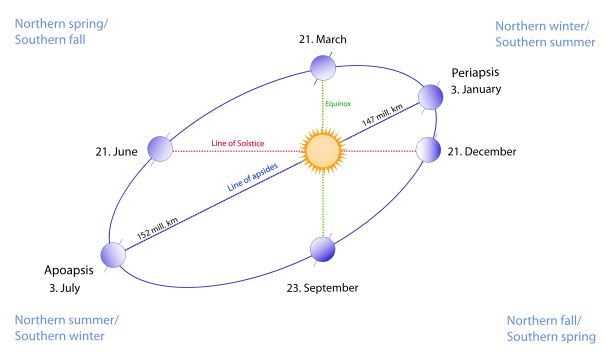 If you were to record the position of the sun in the sky at the same time every day, let’s say sometime around noon (and subtracting one hour if you are observing daylight saving time), you would notice that the sun takes a rather strange path, called “analemma”.

Why does the sun take this strange path? There are two reasons and they are completely independent from each other.

1. The Earth is tilted on its axis 23.5° in relation to the plane of its orbit around the sun.

2. The Earth does not orbit the sun in a circle, but in an ellipse.

Perihelion (when the Earth is closest to the sun) will occur around January 2nd.

Question : Do the observed extremes of position of sunrise and sunset exactly coincide with solstice or with Perihelion?

Stonehenge lies on the exact latitude at which the Midsummer Sunrise and Sunsets are at 90° of the Moons Northerly setting and Southerly rising. This particular phenomena is only possible within a band of less than one degree, of which Stonehenge lies in the middle-third. (R.Heath).

Before the megalithics could have decided where to build the henges, and which direction to face them in, there must have been many years (perhaps centuries) of careful observation of the sun, moon, planets and stars, by seriously dedicated team of sky watchers. The tradition of “Watchers” with stone circles goes back thousands of years. It even gets special mention in the Old Testament Bible, in the Book of Enoch. Who, bless him, does his best to understand what Uriel is trying to tell him, but Enoch comes across as a confused numpty. More on that later.

In the absence of any handy timepieces, the Watchers were not watching clocks, they were watching the changes in the observed position of sun rise and sun set, at that latitude. The extremes of which don't exactly coincide with the solstices. It’s no surprise that the astronomical community has a "proper name" for these figure-of-eights : Anelemma. But the shape of these anelemma varies depending on your latitude. Here's what it looks like for Greenwich in London, at 51.48 degrees north, which is a similar latitude to Avebury and Stonehenge. 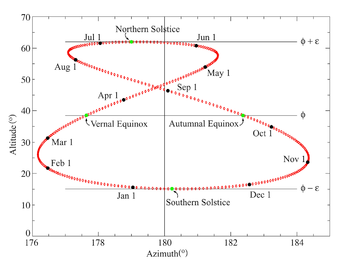 There’s a slight but measurable difference between these positions and the equinox positions. Which might seem that things are not balanced or symmetrical. But when are things "in balance"? A tricky question. That must surely have vexed our Megalithics as well. Stonehenge and Avebury are (surely?) evidence of a profound belief in the symmetry and harmony of the universe around us. Or is that an anthropomorphic projection on my part?

I hypothesis that the first measurements that didn't, err, measure up (sic) must have caused a lot of megalithic head-scratching by the Druids and/or the Captains of The Watchers.

After starting this, and scouring the internet for more on "analemma sunrise and sunset", I found mathbabe.org. In particular, their page on Analemma, which nicely reinforces the point(s) I'm stumbling towards. I quote:

What is time, anyway? How do we know what time it is? What with time zones, and daylight savings time, we’ve definitely corrupted the idea of it being noon when the sun is at its highest in the sky or anything as definitive as that.

So let’s imagine there are no time zones, that you are just in some specific place on the earth. You never move from that spot, because you’re afraid of switching time zones or what have you, and you’re wondering what time it is. If someone comes by and tells you it’s daylight savings time and to reset your clock, you tell them to go to hell because you’re thinking.

From this vantage point it’s definitely hard to know when it’s midnight, but you can for sure detect three things: sunrise, high noon, and sunset. I say “high noon” to mean as high as it gets, because obviously if you’re way north or way south of the equator the sun will never be totally overhead, as I noticed from living in the northeast my whole life.

That slight difference might be crucial in explaining the positions of Avebury and Stonehenge relative to each other. Almost exactly north-south of each other. But not quite exact, when using modern grid measurements. But perhaps exact when using anelemmic measurements? But this is a distraction from a more basic question – what kind of calendar we should use. What would you choose? A solar or lunar calendar? A lunar calendar is the easiest to get started with. The moon is bigger in the sky, observation is safer (no staring at the sun), and it wouldn't(?) need as much precision as a solar calendar (I stand to be corrected).

If you happen to have a dusty old watch like this in your loft or garage ... 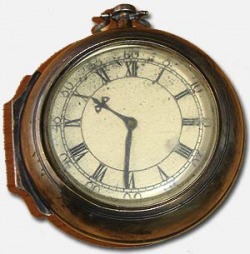 (Harrison's Lesser Watch) ... I'd be happy to give it a good home. With a hat tip to Dell and Rodney.

Next : Pre-Roman shipping and trade routes (at sea)

Recommended reading for those that like to dig deeper:
1) Analemma.com
2) SunGraph
3) Why do mornings still get darker after the winter solstice?
4) Equation-Of-Time Spreadsheet
5) Latitude - the story of John Harrison