There is geometry in the humming of the strings
... there is music in the spacing of the spheres.
Pythagoras

Sometimes beauty may reveal order where the intellect fails
Ref: correspondence with Kevin Kingsland, 1996, The Genesis of Spectrum Theory.

Nature provides us with wonderful and beautiful examples. Many cathedrals and churches worldwide also contain wonderful examples, and here are some unusual ones.

..markings carved on the face of the cubes seem to match a phenomenon called Cymatics or Chladni patterns, ”caused when a “sustained note is used to vibrate a sheet of metal covered in powder, producing marks.” The marks produced by different notes can “include flowers, diamonds and hexagons—shapes all present on the Rosslyn cubes.”
Ref : Rosslyn Chapel’s Music Code

Here's a video by Noel Cunningham on Youtube of Chladni patterns:

.. the patterns on the cubes were strikingly similar to patterns discovered by German physicist Ernst Chladni in the second half of the eighteenth century. The Mitchells then hypothesize that Chladni’s patterns must have already been known by the fifteenth century and, on the basis of the layout of the 13 distinctly different patterns on 213 cubes, with only two cubes missing, are able to reconstruct the melody that has been hidden there for over 500 years.
Ref : Rosslyn Chapel’s Music Code

It's worth noting that the origin of the still pictures of the Cubes is unclear:

Stuart Mitchell may not have photographed the Rosslyn Cubes himself. Moreover, one may be forgiven for suspecting, that, in fact, those photos were actually downloaded from Mark Naples’ website for use in Mitchell’s YouTube video, “The Stave Angel,” which shows images of only 11 of the 13 patterns. It is important to note that on Naples’ website only 11 patterns are shown.
Ref : Rosslyn Chapel’s Music Code

Sadly Mark Naples’ website seems to have disappeared (as of March 2019), but a copy of it can still be found via the Wayback Machine internet archive: The Rosslyn Chapel 'Cubes' Investigation.

Similar encoded symbols have been found in other Templar Chapels. For example, by Rory Duff:

The second mystery was found in another Knights Templar chapel in the South of France. On its ceiling were circular graffiti like patterns that had never been decoded.
Ref : Grail Found

Just imagine any church/chapel/cathedral/temple with masons and carpenters working inside - with lots of dust from stone working and wood cutting - all just gathering on any flat surface, waiting for a choir to start singing and producing resonant frequencies. For any imaginative or curious workers, it would be great fun, getting the choir to sing different harmonies and finding how many different patterns resulted. Then making copies of the shapes in stone. Analogue sound production technology, not digital like now. :-)

Lest we forget, these examples of geometric carvings may be several hundred years old, yet they are relatively new!

Keith Critchlow in his book 'Time Stands Still' .. describes a collection of Neolithic stone spheres carved in Scotland with detailed Platonic symmetries. This suggests that the early peoples of Britain had a fundamental understanding of arithmetic, geometry and the universality of mathematics at least 2,500 years before the time of Plato.
Ref : Nicholas Cope, Knap of Howar and the Origins of Geometry

These are up to 5,000 years old, found mostly in the north-east of Scotland, the Orkneys, and a few on the Western Isles (on Iona, Skye, Harris, Uist, Lewis, Arran, etc). Most are about 70mm in diameter, about the size of a tennis ball. As for their purpose, various suggestions have been made e.g. weapons, weights, working of hides, etc. To my mind, these are all nonsense, as the stone spheres are all far too intricately made, with a detail of craftmanship far beyond what would be needed for "ordinary" items like weapons, weights, and leather-working tools. But consider this - within recorded history, it has been part of the tradition of apprenticeships and technical colleges for hundreds of years that all students should produce models that demonstrated their abilities and skills. What better way of letting apprentice stoneworkers prove the quality of their skills? 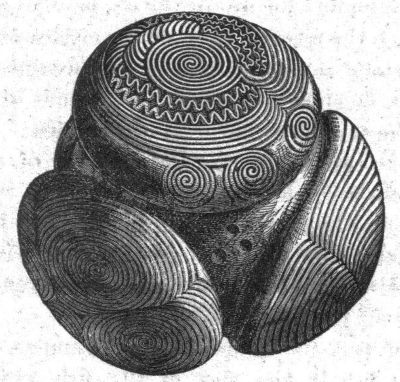 The higher purpose of geometry is to participate, body, soul and spirit, in the objective universal laws that govern and cohere our universe. This activity can lead us directly to the centre of our own understanding which unifies us with the whole.
Ref : Keith Critchlow (Hidden Geometry of Flowers)

Geo-metry : Most sacred tool ever invented is the compasses. The pivot point is the Eye of God. The leg of the compass is the Ray of Creation. The sharp point (consciousness) on one leg is placed into the field, originally called Chaos by the Greeks, representing the unordered universe. The distance between the legs (on the field) represents the degree of love or affection for the creation. ... Drawing a circle is putting order into the blank space, the chaos has to be ordered. Every degree swept is symbolic of the perfect number of days in the year. The circle is a symbol of eternity. ... In Islam, if you try to ask the craftsman there about such an instrument, they will deny they've got one, thye'll deny everything because they're not allowed to show this instrument to a pair of eyes of someone who is not initiated.
Ref : Keith Critchlow, Sacred Geometry, Part 2

I've been meaning to include some pictures of flowers, as they demonstrate a natural form of Chladni patterns that defy orthodox explanations from botanists. Why should any flower even bother to produce such beautiful shapes? Yet they do, and there is a form of order there beyond our comprehension. If Chladni patterns are formed by resonance, what are flowers resonating with? I will add some pictures, when I have found a way to take pictures that do them justice.