On the similarities between the Spectrum Star, the Eightfold Star, and the Eight-Spoked Wheel.

Here is the Spectrum Star, also known as the Spectral Compass. Symbolically used to indicate the different cardinal directions we may take, according to our types of personality and the choices we make. 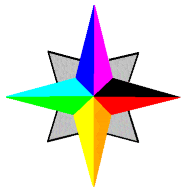 Here is a simplified version that resembles the Spectrum Star.

Here is another slightly more complex version of the same thing.

But what does it symbolise?

The Eightfold Star, which has been employed from ancient times to represent Life Divine
http://astrumsophia.org/tradition.html

The use of phrases like "from ancient times" without provenance can sometimes smell a bit suspect, like a Creation Myth. However, we may learn more by asking who used the Eightfold Star?

(the) eighteenth century Society of the Blazing Wheel, Societas Rotae Fulgentis, who guarded the tradition for future generations, laying the foundations and preserving the sphere of amity upon which, and within which, Aurum Solis came to be established.

This was also known as the Ogdoadic Star:

The mysteries of the Ogdoadic Tradition were early transmitted to a number of the medieval Guilds, profoundly influencing their initiatory rites and disciplines. Thus ensued a high flowering of true Ogdoadic symbolism in art and architecture: enduring and sure tokens which bear witness to the mystical insight and elevated calling of the Guildsmen. Initiates of the Glorious Star in these latter times may look upon these Ogdoadic works, upon paintings and frescoes, upon delicate gems and great buildings, and say, 'Here were my brethren.
Ref: Ogdoadic Star 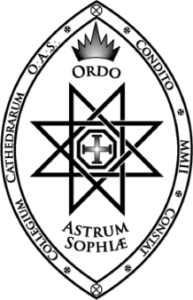 © Copyright The House of Adocentyn

The symbol of the House of Adocentyn is curiously contained in a Vesica Piscis (the intersection of two domains). The name literally means the "bladder of a fish" in Latin. This figure appears in the first proposition of Euclid's Elements.

It was an underlying symbol of Gothic Architecture, esoterically representing the intersection of the inner masculine and inner feminine is the inner sacrum. As mentioned in more detail in Gnostic Fish, on the connections between Euclid, the English Reformation, James Bond and the Rosicrucians. 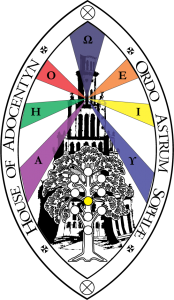 © Copyright The House of Adocentyn

The Clavis Mystica - also contained in a Vesica Piscis.

"En giro torte sol ciclos et rotor igne" - a curious palindrome?
Variously translated; for example:
"The Spiritual Sun has Turned the Ages in a Circle and is their Mover with Fire”

Eternity is the image of God; the cosmos, of eternity; the sun, of the cosmos; and man, of the sun. People call transformation death, because the body is dissolved, but in fact life withdraws into the unmanifest. I shall tell you, as you are listening with such reverence, my beloved Hermes, that all these things that have been thus dissolved and indeed the cosmos, are transformed. Each day a part of the cosmos withdraws into the unmanifest, but the cosmos is never dissolved. This is what happens to the cosmos, these are its cycles and its mysteries. The cycles are a continual rotation and the mystery is the renewal.
Ref : Book 11 verse 15 of the Corpus Hermeticum - The Way of Hermes - translated by Salaman & Van Oyen)

This work shows without any doubt that the Hermetic believer was initiated into several grades before transcending the sphere of the seven planets and the heaven of the fixed stars (the Ogdoad). Then he would behold the God beyond and experience Himself. It is now completely certain that there existed before and after the beginning of the Christian era in Alexandria a secret society, akin to a Masonic lodge. The members of this group called themselves 'brethren,' were initiated through a baptism of the Spirit, greeted each other with a sacred kiss, celebrated a sacred meal and read the Hermetic writings as edifying treatises for their spiritual progress.
Ref: Preface to The Way of Hermes

This "transcending the sphere of the seven planets" is uncannily alike to the Sanskrit tradition of seven chakras and paths to self-awareness.

The heart of the Hermetic teaching contained in this book is the realisation that the individual is fundamentally no different from the Supreme. This realisation is gnosis, a single, immediate event, characterised as a second birth.
Ref: Translators' Foreword to The Way of Hermes

This symbolises the Eightfold Path of Bhuddhism

Also known as the Dharmacakra symbol.

The Dharmacakra symbol refers to an eight-spoked wheel that is a universal symbol of Buddhism. Also called the Wheel of Dharma, it represents the Dharma or law taught by the Buddha as the path to the achievement of nirvana or enlightenment. The Buddha is believed to have turned the Wheel of Dharma and set it in motion with his first sermon, after attaining enlightenment, delivered at the Deer Park in Sarnath.

The Dharmacakra is also representative of the eternal cycle of life, death and rebirth. It is one of the auspicious Ashtamangala symbols of Tibetan Buddhism. The Tibetans refer to it as ‘chos kyi’khor lo’, meaning the ‘wheel of transformation’. The motion of the wheel signifies spiritual change as the teachings of the Buddha cut through all illusions and obstacles impeding learning and understanding.

As a modern reworking of ancient material, the Spectral Compass also symbolises growth and transformation.

Next : Towards a Unified Communications Model