A great myth-maker has summarised the existing situation nicely:

"Celtic" is a magic bag, into which anything may be put, and out of which almost anything may come. Anything is possible in the fabulous Celtic twylight, which is not so much a twylight of the Gods as of the reason.
JRR Tolkien

Any research into Celtic History sooner or later runs into the thorny question of where Celts are supposed to have come from. For historians of the written record, this is difficult, because there are very few written records, and the few that do exist are usually not written by Celts.

If you are an academic, it depends on which branch of the academic tree you are sitting on. The subject called “History” largely depends on written records, never mind how suspect they may turn out to be. Surprisingly often, they are very suspect, because the art of political propaganda is just as old as written records. A classic example would be Julius Caesar’s account of the wars in Gaul; big on the superiority of the Romans and the inferiority of the unshaven (barbarians).

It's a trap for the unwary, as much effort needs to be made to seperate the "facts" from the propaganda. So much so that the "facts" often appear to come from a factory (a place where things are created, manufactured or transformed from other materials).

If you can’t find a written record, you are in the realm before history starts, so you have to go climb across to another branch, probably the “Prehistoric” or the Archaeology departments. Or, if you are feeling really adventurous, you could try swinging across to the Genealogy Department to have a look at the very latest in orthodox opinions being turned over with DNA profiling and blood haplogroups. Some of those will get a mention later.

To compound the confusion, the “Celts” of yore also had a habit of undertaking mass migrations that went in all kinds of surprising directions.

I say “Celts” because there’s yet more confusion about who the Celtic tribes were, with short dark people and tall fair-haired people all being lumped together as “Celts”. Some might wonder how or why there are tall blonde Celts as well as short dark Celts. As most of the early history we now rely on was written by Romans, a short examination of that is in order, which you should do right now if you haven't already done so.

We now pause for an intermission, while you go off and do your own research and get confused.

These “Celtic” migrations often went eastwards as well as westwards, and sometimes back to places they had been centuries before. But in the meantime their identity could be lost in the mists of time (and historical accounts) because the tribal names have changed in between. Especially when the history is written by somebody other than the Celts. Which is almost invariably the case when we are relying on Roman or Greek accounts.

A couple of examples will illustrate the issues involved.

The Galatians were a Celtic people that dwelt mainly in the north central regions of Asia Minor or Anatolia, in what was known as Galatia, in today's Turkey. In their origin they were a part of the great Celtic migration which invaded Macedon, led by Brennus. The original Celts who settled in Galatia came through Thrace under the leadership of Leotarios and Leonnorios c. 278 BC. These Celts consisted mainly of three tribes, the Tectosages, the Trocmii, and the Tolistobogii, but they were also other minor tribes. They spoke a Celtic language, the Galatian language, which is sparsely attested.
Ref : Galatians

Originally from what we now call Southern France. 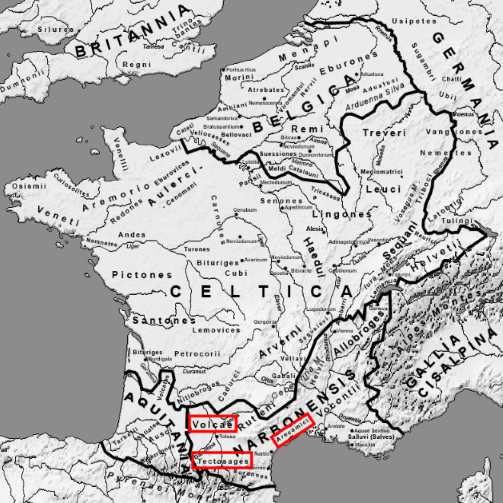 These people took their traditions with them.

The constitution of the Galatian state is described by Strabo: conformably to custom, each tribe was divided into cantons, each governed by a chief ('tetrarch') of its own with a judge under him, whose powers were unlimited except in cases of murder, which were tried before a council of 300 drawn from the twelve cantons and meeting at a holy place, twenty miles southwest of Ancyra, written in Greek as Δρυνεμετον (Drunemeton or Drynemeton, Gaulish *dru-nemeton "holy place of oak"). It is likely it was a sacred oak grove, since the name means "sanctuary of the oaks" (from drus, meaning "oak" and nemeton, meaning "sacred ground").

These are the same "Dru" people and places mentioned in Druids at home.

Secondly, the origins of the Irish, which are many and various to put it politely. Others might call it a complete shambles of conflicting Creation Myths. In Irish legend, the Fir Bolg were in Ireland before the Tuatha Dé Danann arrived.

The Fir Bolg in turn were descended from the Muintir Nemid, an earlier race who abandoned Ireland and settled in different parts of Europe. Those who settle in Greece become the Fir Bolg and eventually return to the now-uninhabited Ireland. After ruling it for some time, they are overthrown by the invading Tuatha Dé Danann; another group descended from the Muintir Nemid.

So they went all the way to Greece, stayed a while and then came back again? Confused? You will be. This wasn’t some kind of prehistoric package holiday for a few friends and families. Several times in Celtic history, groups of thousands of people have upped-sticks and moved.

But note : The Fir Bolg “contained two sub-groups known as the Fir Domnann and Fir Gáilióin”. If the legends contain any grains of truth, “Bolg” might be Belgae (South East England), “Domnann” might be Dumnonii (Devon and Cornwall), and Gáilióin might be Cúige Laighean, Laigin.

Some place names can be surprisingly persistent, even surviving translation into other languages. In Roman Britain, the administrative capital of the Belgae was at Venta Belgarum (Winchester), and the Dumnonii administrative centre was at Isca Dumnoniorum (Exeter)

If you scroll back up this page for a moment, you'll see that in Roman times, where the Celts lived is pretty clear-cut. It was in the west, centre and south of what's now France. Romans and Greeks called these people Celtae and Keltoi. When they mention the British Isles they used different words and say they used a different language. Julius Caesar was quite emphatic about the differences:

All Gaul is divided into three parts, one of which the Belgae inhabit, the Aquitani another, those in their own language are called Celts, in our [latin] Gauls the third. All these differ from each other in language custom and laws. The river Garonne separates the Gauls from the Aquitani, the Marne and the Seine separate them from the Belgae.

The dominion of Narbonitis, whom the men of former times named 'Celtae'; and it was from the Celtae, I think that the Galatae as a whole were by the Greeks called 'Celti'.

Some might say: but didn't Caesar mention Gauls in Britain? Yes he did, but these were the Belgae Gauls (= what we now call Belgium), not the Celtica Gauls, and they were only in the South East corner, as recent invaders.

The interior portion of Britain is inhabited by those of whom they say that it is handed down by tradition that they were born in the island itself: the coastal portion by those who had passed over from the country of the Belgae for the purpose of plunder and making war; [Caesar Gallic War 5:12]

If you are stubborn or persistent enough (and I hope you are), you might still say : "But hang on, I still want to know, what's a "Celtic" language? ... "

You might also be enquiring enough to find out why these four words are not an alliteration:

For more, see : The Scots are not Kelts

Next : Druids at home

1: The Scots are not Kelts