The Green Knight enters the Court of King Arthur and challenges anyone to chop off his head. Gawain takes up the challenge. The rest is classic (and wonderful) Arthurian legend.

An expert explained it thus:

Gawain must lose his head as the green knight did. He doesn't of course but then the world doesn't end at the new year, it is reborn. Gawain is reborn a sadder and wiser man. He has died and come back to life. He is the sacrificial victim that is needed for the new year to come in. The new year always demands a sacrificial victim and these days we have the baby Jesus to play such a role. 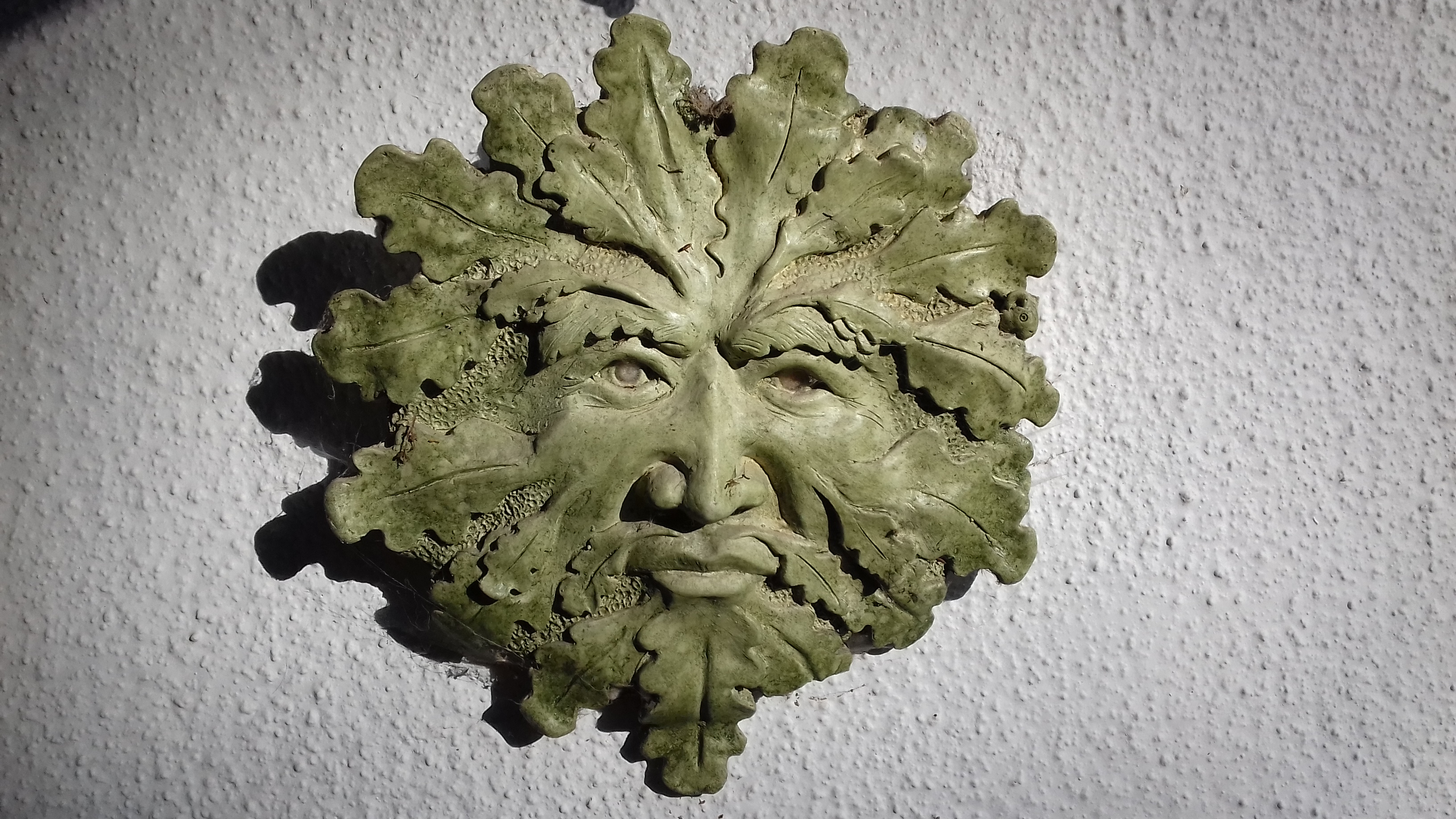 Green Man at The Sanctuary - © Copyright this author, 2019

Notice that the Green Man is symbolically surrounded by oak leaves.

The full poem also contains the first mention of something else symbolic:

The poem contains the first recorded use of the word pentangle in English. It contains the only representation of such a symbol on Gawain's shield in the Gawain literature. What is more, the poet uses a total of 46 lines in order to describe the meaning of the pentangle; no other symbol in the poem receives as much attention or is described in such detail. The poem describes the pentangle as a symbol of faithfulness and an "endless knot". From lines 640 to 654, the five points of the pentangle relate directly to Gawain in five ways: five senses, his five fingers, his faith found in the five wounds of Christ, the five joys of Mary (whose face was on the inside of the shield) and finally friendship, fraternity, purity, politeness and pity (traits that Gawain possessed around others). In line 625, it is described as "a sign by Solomon". Solomon, the third king of Israel, in the 10th century BC, was said to have the mark of the pentagram on his ring, which he received from the archangel Michael. The pentagram seal on this ring was said to give Solomon power over demons. Ref : First recorded use of the word pentangle

Note the tenets of Gawain : friendship, fraternity, purity, politeness and pity. Compare with the tenets of Freemasonry : Brotherly Love, Relief (charity) and Truth.

But where does the name Gawain come from?

A Gaelic expert explained it to me:

Gawain or Gowan is Gaelic for Smith. Even Govan in Glasgow is of the same root. Gawain is tested with an iron axe and also uses it to chop off the Green Knight's head.

Recorded in many forms including: Gow, Gowan, Gowans, Gowanson, Guan, and Going, as well as dialectals such as Quogan, Quoane, Quonne, logic would suggest that this surname should be the most popular in Scotland and Ireland since it means "smith". However it is much rarer than its meaning might suggest that it should be. It derives from the Gaelic "gobha", meaning an iron worker. Ref : Last name: Gowan

Therefore, Gawain or Gowan, as both a symbol of rebirth and as a metal worker could be a direct link from Arthurian Legend to Freemasonry. When Lodges are opened, there is a piece of ritual all Freemasons should know by heart.

There are two old words here that many people will not be familiar with, especially their original meanings. Cowan and Tyler.

If you ask "What is a Cowan?"... the oldest dictionary source I can find is Dr. John Jamieson’s Etymological Dictionary of the Scottish Language published in 1808:

“Cowan, s. 1. A term of contempt; applied to one who does the work of a Mason, but has not been regularly bred.” 2. Also used to denote one who builds dry walls, otherwise denominated a dry-dyker.” 3. One unacquainted with the secrets of freemasonry.”

Chambers 20th Century Dictionary states:
COWAN, [‘Kow’an] (Scot) n, a dry-stone diker: a mason who never served an apprenticeship: one who tries to enter a Freemason’s lodge, or the like, surreptitiously. [origin doubtful]

(It) is not found in any of the old manuscripts of the English Masons before the eighteenth century but does occur in an old Scottish manuscript by William Schaw in 1598. William Schaw was the King’s Master Mason and Warden General to the craft. He drew up a code of trade regulations, customs and a code of conduct that Scottish masons followed. These were known as the Schaw Statutes. In the following passage he writes: “That no master nor fellowcraft receive any Cowens to work in his society or company, nor send none of his servant to work with Cowens.”

It is first introduced into English Freemasonry in James Anderson’s book of Constitutions published in 1738 at the request of the Grand Lodge of England. James Anderson was a Scottish Mason and a member of the Lodge of Aberdeen so perhaps he knew all about Cowans : “but free and Accepted Masons shall not allow Cowans to work with them, nor shall they be employed by Cowans without an urgent necessity and even in that case shall not teach Cowans but must have a separate communication.”
Ref: What is a Cowan with permission and © Copyright Lodge Temperance

The Lodge Temperance has kindly anglicised the original text. They explained that it also appears in E.L. Hawkin’s "Concise Cyclopaedia of Freemasonry" (published originally in 1902) in its more original Lowland Scottish English:

He {Hawkin} states Cowan is considered to have been a Scotch operative term, and to have always signified an irregular Craftsman with whom the brethren were prohibited from working, as we find enacted in the Schaw Statutes of 1598 (written by William Schaw and gives a code of rules governing the activities of Operative Masons in Scotland.). “That na Maister or Fallow-of-Craft ressave ony cowanis to wirk in his societie or cumpanye nor send nane of his servands to wirk wt cowanis under the paine of twentie pundis so often as ony persone offendis heirintill.”

My understanding is that John Jamieson and James Anderson were both Lowland Scots who knew not the Highland Gaelic. Which means it's entirely possible that Cowan is a lowland Scottish pronunciation (in English) of the Gaelic Gowan. From there, via Anderson's Constitutions, it becomes part of UGLE foundation myths.

Also, if the Gaelic "gowan" is rendered into English as "cowan", how is the even-older Gaelic "gobha" rendered?

It ("gowan") derives from the Gaelic "gobha", meaning an iron worker.

Curiously, "cobha" is much like "cobber" - a person who makes cob walls.

The etymology of cob and cobbing is unclear, but in several senses means to beat or strike ... cob may be referred to as an "unburned clay masonry" Ref: Cob material (Wikipedia)

Beat or strike? It sounds like the iron-working smith is at work again, not divested of metals, and working the roughest of materials. And still shunned by skilled master masons. All of which leads on to English Stone Masons (with their white aprons) disapproving of Scottish smiths and metal workers with dirty aprons. With no thanks to whomever made the sword for the Tyler!

So, who's the Tyler?

Wikipedia has an orthodox explanation:

Frankly, that explanation struck me as dull and disappointing. Well, that's often the way with orthodoxy, mired in literal explanations. But..

Among the earliest recorded uses of the surname is from the 14th century: Wat Tyler of Kent, South East England.

Well, that's a bit more interesting, it puts some flesh on the bones. What was Wat? Was Wat Tyler a freemason?

Next : In praise of the Seven Liberal Arts