In praise of the Seven Liberal Arts

From ancient to modern times, people have been commanded to study the Liberal Arts. But what are they? In the Western world, our perception of the history of the Liberal Arts is very much focused on the Greek version, because they were the first to write it down! Before forming their own schools, Aristotle and Plato studied in Egypt, where is was an ancient oral tradition, as in India.

The Quadrivium was first formulated and taught by Pythagoras as the Tetraktys around 500BC, in a community where all were equal, even materially and morally, and where women had equal status to men. It was the first European schooling structure that honed education down to seven essential subjects, later known as the seven liberal arts. 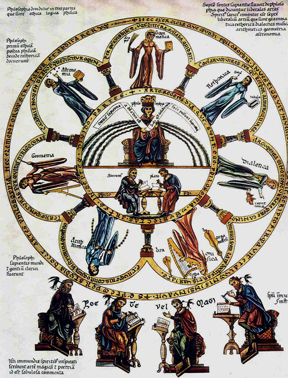 Crucially, Plato continued this. When he returned to Athens in 387BC, he purchased a site on the outskirts of the city that would become the school of this science. The site was close to the barrow of a Bronze Age hero called Akademos. The school took its name from this obscure relic, and became the Akademeia.

Plato's academy was open to anyone with the leisure and inclination to frequent its premises. It continued the example of Pythagoras and also admitted women. This was highly unusual by the standards of other Greek Academies, but those ones were not teaching the Seven Liberal Arts.

The Seven Liberal Arts were bequeathed to us by the Ancient Greeks as the basic required study for those participating in a democracy. Vestiges of them are found in most school curriculums today and were taught in Plato’s Academy for a thousand years from 500BC until about 450AD.

Crucially in the West, these were not lost but came back to mainstream consciousness as part of Renaissance thought in the 15th and 16th centuries, with Architecture being a worthy study for gentle-folk. In pursuit of the Renaissance ideal, the “Universal Man”, people once again sought to learn all the arts central to human knowledge, including mathematics and astronomy.

These formed a central theme in the Constitutions of the Freemasons, written by James Anderson in 1723. 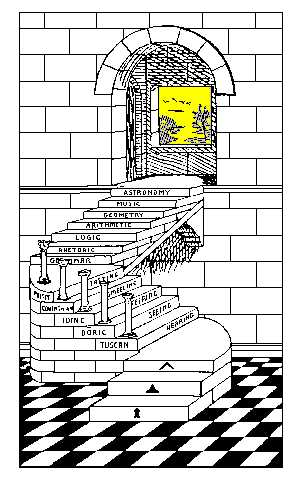 I believe that the changes now happening in Freemasonry are in keeping with the command to study the seven liberal arts, with compassion and equality for all. That is, to accept women as well.