On the surprising (and unsurprising) similarities between Physics, specific martial arts and the various forms of yoga. Not limited to Hatha Yoga and some derivatives colloquially known as "Catering Yoga".

The Dance of Shiva

The Dancing Shiva is on permanent display at the Large Hadron Collider at CERN, and symbolises the cosmic dance of creation and destruction. 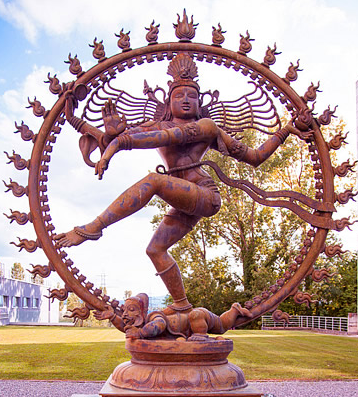 Here is Aldous Huxley who describes the Dancing Shiva image, and asks why we have no such symbolism in Western religions?

This is Shiva as Nataraja - the lord of the dance - with four arms, with one leg raised. Dancing within the circle with flames, and the whole universe of mass energy space & time. Shiva is everwhere in the universe. The manifestation of the world is Lila - his play - beyond good and evil. The long hair of the yogi streams out to the limits of the universe. He both creates and destroys. Shiva dances on the back of a dwarf called "Apasmara" (aka " Muyalaka") - a demon representing ignorance/evil/ego, and Shiva has to break the back of the ego. At once cosmic, psychological and spiritual. The end of sorrow is putting one foot on the ego and raising the other against gravity into the state of contemplation.
Ref : Aldous Huxley, "Speaking Personally", 1961

In The Tao of Physics, by Fritjof Capra, the author explained:

The Dance of Shiva symbolises the basis of all existance. ... modern physics has revealed that every subatomic particle not only performs and energy dance but also is an energy dance; a pulsating process of creation and destruction.

Next : Yoga, the hard side